Giving kids the confidence to achieve

Air Camp is a hands-on, educational adventure in aviation and aeronautics. We inspire students at the intermediate and middle school levels, as well as teachers and educational leaders across all grades, to learn more about science, technology, engineering, and mathematics (STEM) using aviation and aerospace as our medium while promoting the values of scholarship, leadership, and citizenship.

Air Camp is the vision of Dayton-area leaders who want to help young people nationwide achieve their potential, develop critical-thinking and problem-solving skills, and pursue further education and future careers in STEM-related fields, aviation, and aeronautics.

A meeting of community leaders organized by Dr. Dave Ponitz, Retired President of Sinclair College, at the request of Dr. Vince Russo to discuss STEM learning for K-12.

A meeting chaired by Dr. Tom Lasley and attended by Gen. Dick Reynolds, Dr. Vince Russo, Mr. Dan Sadlier, Ms. Amanda Lane Wright, and other community partners where a decision was made to “do something” using current Dayton Community assets and not pursue a dedicated physical facility.

Dayton, Ohio is the birthplace of aviation and a center of invention. Here, the Wright Brothers invented and perfected manned, powered, controlled, heavier-than-air flight and experimented with early airplanes at Huffman Prairie.

From highly trained educators to dedicated volunteers, please meet our

Shannon Coblentz has been involved in educational endeavors for young learners for over fifteen years. Throughout her career she has served in leadership roles in education that have positively impacted students at all grades K-12. While serving as a social studies teacher for students in grades 9-12 at the esteemed Columbus Alternative High School in Columbus, Ohio, she also led the Humanities Department by serving as Department Chairperson and participated in an Annenberg Fellowship. She later sought leadership opportunities to serve an even broader spectrum of stakeholders in achieving academic excellence as a middle school principal for grades 6-8 and then as an elementary school principal for students in grades K-5. She received her bachelor’s degree from Wilmington College, her master’s degree from The Ohio State University and is currently a candidate in the doctoral program at Miami University (Oxford).

Manager of Finance and Donor Relations

Manager of Finance and Donor Relations

Amanda Coomer joined Air Camp as the Manager of Finance and Donor Relations in January 2018. Prior to joining Air Camp, Amanda spent 15 years working at a public accounting firm in Dayton, OH, where she provided assurance and business consulting services to both public and privately held businesses in a variety of industries. Amanda is a Certified Public Accountant and received a Bachelor of Science in Business Administration, Accounting and Management Information Systems from Wright State University.

Director of Curriculum and Instruction

Heidi Edwards is Nationally Board certified and teaches physical science and Biology at Oakwood High School in Dayton, where she serves as the Department Chair. Heidi was the Air Force Association’s 2011 State of Ohio Teacher of the Year, and the 2012 National Teacher of Year Runner-up! More recently Heidi was selected as a NASA SOFIA Ambassador and was able to fly at high altitudes during two missions collecting valuable electromagnetic data while on board a NASA Boeing 747 research aircraft. Most recently Heidi received the 2018 A. Scott Crossfield Educator of the Year Award. 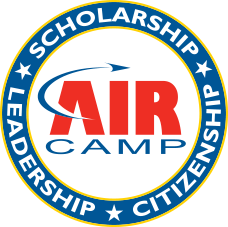 As an important Air Camp stakeholder, I want to keep you as up-to-date as possible on our programs for this year.

After reviewing the conditions for conducting camps this spring and summer, we have decided to cancel all of our student camps.

We continue to evaluate the national response to the current pandemic, and will modify all of our other activities as necessary. We are assessing the possibility to host a Teachers Air Camp and add student events for later this year. We will send further notifications as additional decisions are made.

All of us associated with Air Camp greatly appreciate your support, and hope you stay safe during these unusual times.

Powered by Convert Plus